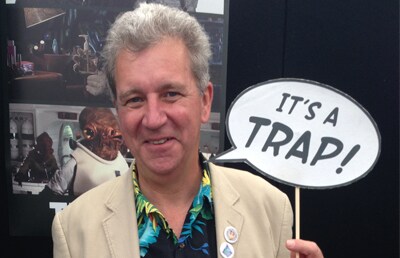 How did you get into puppeteering?

I found a couple who did shows and they taught me how to build puppets. I thought 'people have this much fun and earn money? I want to do it!' I got interested in puppetry at university and I started doing Punch & Judy shows at renaissance fairs. That led to working in New York City with The Muppets on Sesame Street with Jim Henson, who was the most beautiful boss you could possibly work for.

And that lead to working in Phil Tippett's famous creature workshop?

I'd worked with a guy named Mike McCormick on The Dark Crystal and he was working in Phil's workshop, and one day they were experimenting with the Sy Snootles puppet character, who was quite heavy – about 60 pounds. One of the operators lost his balance and fell off the scaffolding and broke his arm. So I got a call and got the job and wound up building a lot of the characters in Return of the Jedi.

How did you wind up becoming the primary puppeteer for Admiral Ackbar?

I saw Ackbar and asked if I could operate him and they said 'Okay'. I'd like to say I auditioned against thousands of talented people and I got the part based on how phenomenal I am, but the truth is I was in the right place and the right time!

Operating him sounds quite complicated...

I convinced Phil to make a hand puppet of Ackbar's head for close-ups. The problems with full body suits and animatronics in those days was that if you got your head in there, there wasn't a lot of room left for mechanisms for the eyes and nose and what have you.

So we had a full body suit that only had a cable-controlled lip synch. What they'd usually do is have the head on a table and have 50 cables coming out of it to make the cheeks move and the ears wiggle and that sort of thing.

I convinced Phil to let me take the head off the table top and actually carry it like a puppet so I could be inside the body and operate the face Muppet-style, and then Mike Quinn operated all the other facial controls for me. The majority of shots you see of Ackbar aren't me in the suit but me doing the hand puppet. Were you ever in Ackbar's full body suit?

I am in the suit for the whole scene in front of the hologram in the briefing room, explaining the master attack on the Death Star. When I mouth the famous line "It's a trap!", that was Mike Quinn scrambling madly just out of shot with the cable controls so Ackbar would mouth the words.

Were you delivering Ackbar's lines on set, even though the voice was redubbed?

Inside the suit or underneath the puppet, yes. I did have to learn my dialogue! And I've spent my whole career being over-voiced, so that wasn't a problem [Ackbar's voice was provided by voice actor Erik Boauersfield]. I was only 24 back then, and Ackbar needed the gravitas of a man in his 60s, which Erik was at the time. So I did the dialogue and the performance and he watched that and copied it as closely as possible but with a lovely deep, commanding voice!

Were there any Ackbar scenes that didn't make the film?

We filmed so much more – you only see about a quarter of what we actually shot. There was much more interaction with the other Mon Calamari, and we did mock-up battle sequences. In fact, one time they swung me toward the window in my chair so I could see the battle going on, and the props guys stopped the chair so fast that the shaft broke off the bottom and I flew right through the window of the spaceship! If they could ever find that bit of footage and put a broken glass sound with it as I flew off set, that would be pretty good [laughs].

Admiral Ackbar has become quite the icon over the years...

I have my own box of Ackbar cereal from Robot Chicken: Star Wars! I love all that. I don't spend much time on the internet, but my niece does, and she sends me links about Ackbar-related stuff. The most recent one is where they've taken all of Ackbar's scenes and redubbed it with George Clooney's dialogue from Ocean's 11! It's beautifully done – they've matched the mouth synch and everything. I don't know where these people get the time! But long may they do so, because it keeps him in alive in people's memories.

Did George Lucas like to frequent the Return of the Jedi creature workshop?

George loved hanging out in the workshop – he would show up at 9 in the morning just to see how we were getting on. He gave Salacious Crumb and Admiral Ackbar their names. It wasn't all thought out and pre-decided – he'd just come in and look at them and it got made up as we went along!

I must admit I didn't know what 'salacious' meant at the time, so I looked it up and it said 'one who gets enjoyment from the suffering of others', which I thought was great – salacious by name, salacious by nature! He got lots of enjoyment from other peoples suffering. We filmed all sorts of people getting fed to the Rancor when we were filming, even though only a couple made it into the movie. But each time Salacious was right there on the sidelines, laughing hysterically!

Would you discuss creature designs with George?

Yes. In fact Ree-Yees [a three-eyed alien seen in Return of the Jedi], he was meant to be the leader of the Rebel forces, but when George came in one evening I said 'George, if I was puppeteering this I would have a really hard time because he's always going to appear shifty because I can't give him a strong eye focus.' If he's looking at you, it's like 'Which one of those three eyes is looking at me?' Whereas Ackbar, even though his eyes were on the side of his head, he still had a focus, like when a horse looks at you. So I'm afriad Ree-Yees got bumped to Jabba's palace and Ackbar got promoted to Admiral just because he had good eye focus!

Tell us more about operating Salacious Crumb – we hear he was popular on set?

He was my favourite one to do - he was my alter ego. Because he was a hand puppet I could put him on and walk around with him and goof around and make jokes with him. He brought out a devilish side of my personality [laughs]. You can get away with murder with puppets! In Jabba's palace we'd always spend a lot of time waiting for the next take, and as a kid I used to watch The Addams Family where Gomez would kiss Morticia's wrist and work his way up her arm. So with Carrie [Fisher], Salacious used to start down at her ankle and work his way up, whispering sweet nothings. So I used to goof around like that, and she found it quite funny with Salacious doing that. Puppets get away with things humans can't!

And you got stuck inside Jabba's throne one time?

Sometimes I would be underneath the floor, but when Jabba's throne was pushed forward to the edge of the Rancor pit, I had to be inside the throne. They wanted to make the throne as thin as possible and create an illusion so it wouldn't look like you'd be able to fit someone in there, but I was inside with a little monitor! One day they called lunch and everybody left, but they forgot the only way for me to get out was to roll the throne back, so I got to spend all of lunch in my own little coffin in the dark, waiting for somebody to come back and get me out of there!

Did you keep any momentos from filming Return of the Jedi?

I had a Blue Harvest T-shirt and cap [the fake name for Return of the Jedi used while filming] and wound up throwing them away after painting my house in them, and I gave away my 'Revenge of the Jedi' T-shirt to a kid who was an uber fan. I wouldn't mind it back – I hear it's worth a lot now! [laughs]

I do still have an original baseball cap with the Yoda ears on them, and when I worked on Labyrinth I got Frank Oz to sign it - that's a thing that I treasure. That and my Yoda magic 8-ball, and two Ackbar action figures that my mom bought me when Jedi came out. My favourite thing though that I had to get was the LEGO Ackbar, because I grew up with LEGO, so for me personally, having a LEGO Ackbar is as close to immortality as it gets! [laughs]

Tim Rose was a guest of this year's Oz Comic Con.