The director of Australia’s Star Walking Inc. – the longest continuously-running Star Wars fan club in the world – talks us through his immense collection of Star Wars memorabilia, from a life-size Jabba the Hutt to a prized photo of Carrie Fisher giving him a hug… 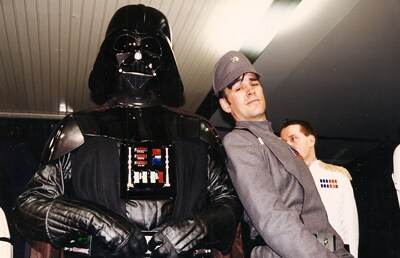 Tell us about Star Walking Inc

It’s been in operation since 1988 and is the longest continuously-running Star Wars fan club in the world. I became a member about 25 years ago and was asked to dress as Darth Vader for the ‘X-wing Tour’ where they toured around Australia with a full-size X-wing to promote the release of the Star Wars special editions.

Do you still have your Darth Vader costume?

I do - it’s about 20 years old now. It was one of the first costumes that Lucasfilm approved outside of their actual suits because he was licensed for the X-wing tour, and other subsequent promotional appearances. Lucasfilm sent [special effects supervisor] Don Bies out here and he inspected it.

When did your Star Wars fandom begin?

Back in 1976. I was a science nerd at school and we were all really excited when we heard this new movie was coming out with real robots in it, so we scoured any magazine we could find for photos of Artoo and Threepio.

We shared the photos the old fashioned way – we’d take them to school and hand them to somebody else! By the time the film came out we’d already built up a picture in our mind of what it would be like, and we were imagining this amazing thing with all these robots roaming around everywhere, and the science nerds were ready to go and enjoy themselves!

What do you recall from seeing Star Wars at the cinema for the first time?

It was when I was 10. I remember lining up for a long time, then finally getting into the cinema and sitting with the other guys discussing what our favourite robots were. Then BANG!, the music came on and everyone stopped - you had the opening crawl and the ship coming in overhead. Everyone was just sitting there in stunned silence the whole time. The first thing I said after it finished was “when are we going to see it again?” I was hooked from day one. When did you start collecting?

When it was my birthday after Star Wars had come out, the toys had just started appearing in the shops, and of course back then I was there drooling, wondering how I could save up $1.95 to buy one of the action figures. When my birthday rolled around mum made me a chocolate cake with R2-D2 stuck in the top, and he was my first action figure. I’ve still got him, and he’s still got chocolate icing stuck in his feet.

Did you have a favourite Star Wars collectible when you were a kid?

No, I loved them all – every new figure brought back a new part of the movie for me. It’s not like I could jump on YouTube and watch clips of the movie back then or there was a videotape I could play over and over again – you had to relive it in your memory.

The figures weren’t that easy to get in Australia, so there was a hunt on, and finding the right one was always a thrill. I remember when The Empire Strikes Back came out they put out a C-3PO with removable limbs, and I remember seeing it in the shop with my mum and getting excited. She said “you’ve already got this one!”, and I said “yeah, but you pull the arms and legs off this!”, and mum told me “well pull the arms and legs off the one you’ve already got – I’m not buying you another one!”

Did you maintain that passion for collecting over the years?

It’s been fairly constant. There was a very lean period when there wasn’t much in the stores [post-Return of the Jedi]. My collection went into hibernation for a while. Then I met Laura, who’s now my wife, and she encouraged me to pull all of my stuff out of storage, so I started pulling out box after box of stuff and putting it on display, and she said “you’re only a couple of figures short of a full set, you may as well go hunt those down.” She probably regrets it now, but she kick-started the collecting again and it snowballed from there!

Talk us through your current collection…

That would take a loooong time! People come to my place to check out the collection, and every piece has a story behind it. That’s what makes a collection special – it’s not just a bunch of toys; it’s memories. There’s a lot to see – people usually need to do three of four loops around the collection before they feel like they’ve seen everything!

It’s an eclectic collection. I have action figures, but there’s also t-shirts, point-of-sale items, badges, a full-sized Han Solo in Carbonite. In terms of action figures I have everything up until the end of Episode III. After that I started becoming more interested in the quirky things – rice bowls, lighters, garden sprinklers – all of the weird and wonderful things that have the Star Wars licence on them. Tell us about any rare or quirky items…

Upstairs I’ve got a full-sized Jabba the Hutt. He was a backdrop for a banquet that Star Walking put on for Return of the Jedi’s 20th anniversary, and it was decked out like Jabba’s palace with the dancing girls and everything.

At the end of the banquet I learned Jabba was going in the bin, and I was like “no no no, he’s coming back to my place.” I got some weird looks from the neighbours as I tried to squeeze Jabba in the back door and up the stairs. There are still green smears on the roof where he didn’t quite fit through.

I’ve got a cardboard cut-out of Darth Vader that was used to promote the Star Wars novelisation before the movie came out in 1977. As far as I know it’s the only one of its kind. When [Rancho Obi-Wan president] Steve Sansweet saw it he was like “woah, I want that!”, and I said “sorry Steve, you can’t have it,” and he said “no, I want that,” and I said again “no, you can’t have it!”

I like my original 1978 Millennium Falcon. It’s not rare, but it’s complete and with no missing parts, which I guess is kind of rare. I love the ’77-’83 action figure range too – I’ve got every single one of those.

As for quirky, there’s the George Lucas beanie baby, that’s pretty cool. Then there’s a Darth Vader mobile phone holder that lights up and breathes when the phone rings and my Jar Jar Binks cap. Also, a lightsaber game from Japan – it’s got a Darth Vader sitting in the top of it and you slide lightsabers into the side, and the last person to slide the lightsaber in makes Vader get ejected out through the top of the machine. That’s kind of a weird one. I’ve also got a Wampa throw rug, and the cat proved why it was called a ‘throw rug’ by promptly throwing up on it as soon as I got it home. There’s also my collection of autographs, which I love: Kenny Baker, Anthony Daniels, Jeremy Bulloch, Peter Mayhew, Steve Sansweet, Ray Park, Dave Prowse, Carrie Fisher, Mark Hamill and a few others. I’ve met every original cast member with the exception of Harrison Ford – he’s the only one that’s eluded me so far.

Carrie Fisher was an interesting story. I was in LA for Star Wars Celebration to get her autograph. I stood in line for three hours and then said “Ms. Fisher it’s a pleasure to meet you. I have to say you look fantastic.”

She looked up from the table and asked “that accent – where are you from?”, and I said “Melbourne in Australia,” and she says “you’ve come such a long way - that deserves a hug.”

As for the movies themselves, I have Star Wars stuff on vinyl, Betamax, VHS, Super 8, DVD, Blu-ray, laserdisc – I think I’ve got Star Wars itself 27 times in various formats at the moment. Something for every occasion! 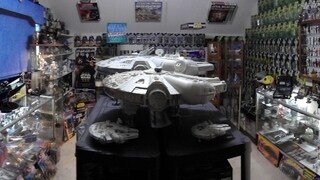