Season 1 of Star Wars Rebels very much had the spirit of adventure from A New Hope.

Will Season 2 now have more shades of The Empire Strikes Back?

I guess we’ve moved into The Empire Strikes Back territory in that now we’ve set up the character dynamics and know who the characters are, the story really starts to catapult forward and get more into their personal issues and back stories.

Now we know the crew of the Ghost, we want to know more about Sabine, more about Hera – where are these characters from and why are they doing what they're doing? You definitely get more of that in Season 2. There's at least an episode for each character that helps explain their back story – where they came from and why they are the way they are when we met them.

In some ways it's a deeper season and I think the action is more meaningful. As our Rebels become more successful, they become a bigger and bigger problem for the Empire. So we have Darth Vader come in and deal them a serious blow right at the beginning of the season, which has to line up with the beginning of A New Hope, which tells you that the Rebels really haven't had a major victory until right before A New Hope. It's tricky continuity wise, but we try and keep the right balance. 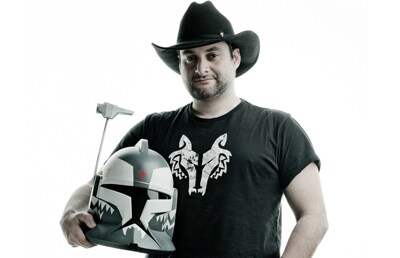 Vader is much more powerful than our guys, so we had to stay true to form with the rest of Star Wars. He comes in and almost breaks our heroes in the first two episodes. I just see that as reality.

You look at classic characters like Vader and think about ways in which you can utilise them in ways you haven't seen. Y'know, hearing that Anakin was one of the best starfighter pilots in the galaxy – even in Clone Wars, we didn't show an immense amount of his flying capability and it was never really the focus of an episode. We wanted to show how Vader could go in and single-handedly destroy this entire fleet if he wanted to support his strength as a fighter. It also plays into how he tries to deal with the Rebels in A New Hope – he goes into the Death Star trench with just two wingmen and largely does everything himself so it's characteristic of Anakin to want to try and do these things and it reminds me of how Anakin would behave in The Clone Wars. So we're trying to draw a lot of connectivity between Vader and Anakin and what we thought he should be like.

[Season 1 spoiler alert] So is the Inquisitor really dead after his fight with Ezra and Kanan?

Yes, he's gone. See, no one believes me because I brought Darth Maul back to life! As soon as someone is cut in half and you bring them back to life, people say 'Dave, I don't believe you!' But I'm telling you, the Inquisitor is dead. Strangely you will learn more about who he was in Season 2.

We were so happy with what Jason Isaacs did with the character so we thought more about where he came from and what he was about, and it has implications because we have two new Inquisitors this season [Sarah Michelle Gellar's the Seventh Sister and the Fifth Brother, who will be voiced by Philip Anthony-Rodriguez]. So they'll on some level talk about the previous Inquisitor and you'll start to understand better the structure of the Inquisitors – how many they are, where they came from, what they are exactly. Giving you a sense of this expanded lore is what makes Star Wars such a rich universe. And working with Sarah Michelle Gellar?

We're very fortunate to have someone like Sarah join the cast. That obviously came out of working with Freddie [Prinze Jr., who voices Kanan], who always said Sarah loved Clone Wars and what Freddie was getting to do, so I started thinking it would be really cool to have her on the show.

I really like people who are enthusiastic about Star Wars so I try and find actors who are not only talented but love the Star Wars universe and understand how important the fans are.

Sarah has a lot of experience of that with 'Buffy' and understanding the value of your fans and what it means to be part of a franchise. So it's a fun opportunity to have her and Freddie in the Star Wars universe.

Most importantly, it's great to see that the Imperials are still rocking some impressive facial hair in Season 2...

[Laughs] Thank you for noticing. Y’know, I don’t know if we do enough of that. When you’re dealing with anything to do with the original trilogy, it has to have a 1970s feel to it – the hairstyles, the clothing. I swear to you, at one point I had Zeb in these fantastic bellbottoms, but it got shot down! Kallus is the king of facial hair – people are always stunned by it, but it’s like, 'Yeah, why not?' Thankfully we’re not in the mullet era, that would’ve been a different Star Wars. I wouldn’t want to animate all those mullets anyway… the only mullet in Star Wars really is Obi-Wan – he had a really good mullet in Attack Of The Clones. He was groundbreaking. [laughs]

We have a feeling you'll agree, but this point in time seems like a particularly great one to be a Star Wars fan...

It’s an ever-evolving universe and there’s more Star Wars being created now than ever in its history, especially cinematically. Who would’ve thought that? Can you imagine being a 10-year-old right now? My goodness, their Christmas is going to be so awesome! [Laughs]