Han Solo himself joins hundreds of Star Wars fans in Sydney for an epic fan event at the iconic Opera House.

It's safe to say that it's not every day that the lights come on at the cinema and you realise one of the world's most famous actors is sitting in your row.

Yet, here we are at IMAX Darling Harbour in Sydney on Thursday December 10, just having witnessed a sneak nine-minute preview of Star Wars: The Force Awakens (you wanna hear a crowd scream? Put the Millennium Falcon in your movie), when a spotlight comes on post-preview to reveal a very, very recognisable face. There's a stunned silence followed by rapturous applause, and then Harrison Ford – Han Solo, people – steps to a podium.

"Hey everyone, what did you think of the footage?" he asks in his most Harrison Ford-esque drawl. After more cheers and hollering, he lowers his voice to a conspiratorial tone, hoping to strike a bargain and sounding a helluva lot like everyone's favourite smuggler.

"Let's make a deal," he proposes, "let's not tell anyone about what we saw here today, okay?"

Yes, Han So—oh, ah, Harrison Ford, we will do whatever you say, lest you set your Wookiee on us. 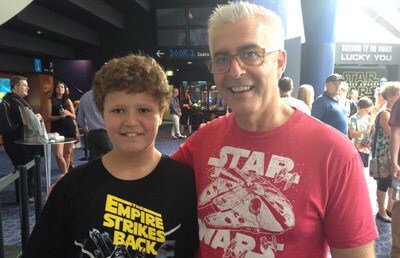 As elated Star Wars fans spill out of the cinema – one Russell Crowe among them – a father and son (both in retro Star Wars tees) can't disguise their looks of glee.

"The footage was really fantastic - it's great to see that even after all of the trailers have come out, there's still a lot more to discover in the film," gushed dad Adrian, 50.

"You can tell there's going to be some great banter in the film, like there was in the original films. Rey's character in particular seems on a par with Leia and Padme."

His son Wilson, 11, loved how it "reminded me of the original films", before revealing he's more a fan of the dark side (Dad's more a light side guy, hinting at a possible reverse Luke/Anakin situation in their future. Hope it works out favourably, guys). 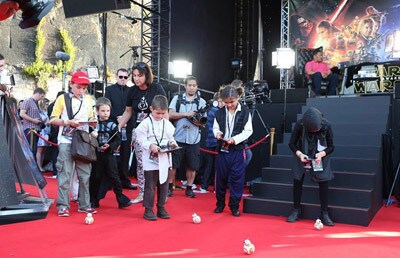 From there it was a brisk walk over to the Opera House to see the main event: the Harrison Ford Q&A held on a giant stage just outside the iconic Sydney venue, where hundreds of fans of all ages – so many dressed up in costume – were eagerly waiting to see Ford in the flesh.

There was plenty of Star Wars-related action on hand to keep fans happy until the Q&A kick-off including loads of remote-controlled BB-8s. Star Wars fandom by Sydney Harbour - we could get used to this. 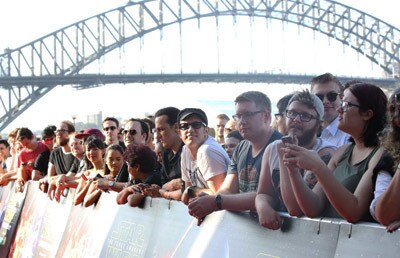 Speaking of everyone’s favourite astromech droid: Sphero CEO Paul Berberian took to the stage with host Jay Laga’aia (Captain Typho in Attack of the Clones and Revenge of the Sith) to talk about the creation and development of ball droid BB-8, the breakout star of The Force Awakens (sorry Daisy Ridley and John Boyega, fantastic as you are).

Resisting the urge to straight up steal the life-size replica BB-8 toy from the stage, instead I’ve asked friends and family really, really nicely to honour me accordingly at birthday time with one of my very own.

As the sun began to set, the crowd began inching closer and closer to the stage in the hope of seeing, or getting a photograph with the main man. 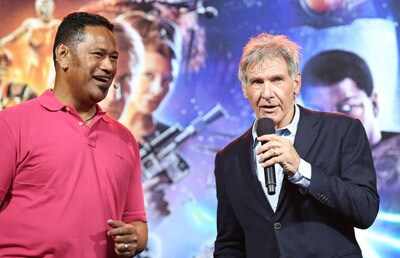 And then icon Harrison Ford arrives: camera flashes erupt, the crowd goes berserk, and Ford graciously makes his way down the red carpet signing items and takes selfies with fans.

After Ford’s great Q&A on stage with Jay, I went on a mission to find some of the best cosplay outfits around and chat to fans, discovering most people had a whole lot in common (Return of the Jedi was the first Star Wars film they saw as a kid; they're right into collecting Star Wars merch and, least surprising of all, were champing at the bit to see The Force Awakens). 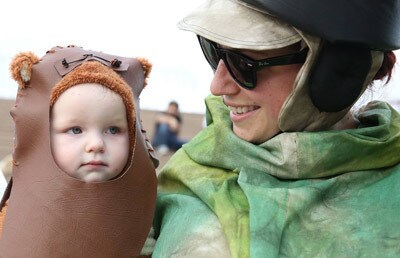 Fan Beginnings: "I was three when Return of the Jedi came out and watched them all as a kid. When I was 15, I re-watched A New Hope and got into it all over again and have been obsessed ever since!"

Costume: "I'm dressed as Leia, but I've always loved Luke and his whole journey through the movies. But I'm still excited to see Han Solo today!" 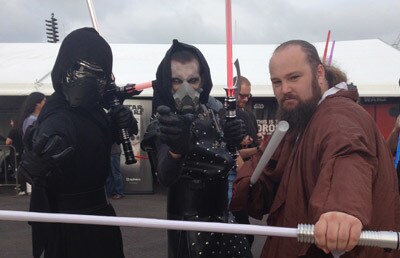 Costume (Dale): "I'm a Clone Wars-era Jedi. The other guys were all doing dark side, so someone had to be the odd one out. If you can't be better than him [Nacho], fight him!"

Costume (Nacho): "I guess it's a little Star Wars meets Game of Thrones! I've created my own style of Sith. I was at The Phantom Menace premiere as Darth Maul, for The Force Awakens I'm going as Kylo Ren.The dark side always has the best costumes, so I always go for them!"

Costume (Joe): "This Kylo Ren costume was easy – it's mostly all bought! I love the dark Sith-y look. I do feel more acquainted with the dark side, and there's only one thing I can say there: [in deep, evil voice] JEDI SCUM!!!" 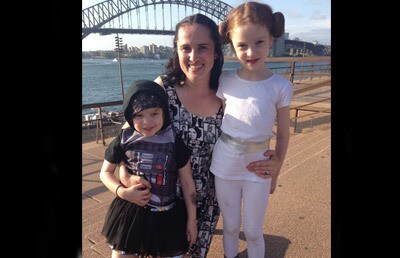 Fan Beginnings: "I saw Return of the Jedi at the drive-in when I was 18 months old, and from then on we always had the toys around the house."

Costume: "Amelie loves Princess Leia, and Clementine obviously loves the dark side. It's a nice balance!

Do they get on because one's light side and one's dark side? Sometimes! But they're a father and daughter combo, so there's still the love there!"