Sydney Star Wars fan Sarah ‘Sez’ Hillier, may only be 5’11”, but that grows to a towering 7’6” once she puts on her beloved Chewbacca costume - one of the most impressive you’re ever likely to lay your eyes on. Here Sez talks us through creating the kit over six months, her favourite ever Chewie moment and her excitement to witness the return of Han and everyone’s favourite co-pilot in Solo: A Star Wars Story… 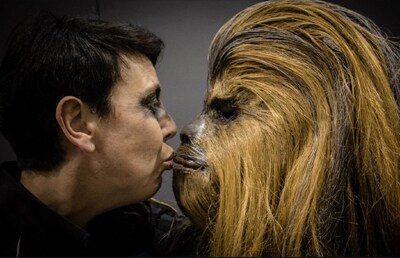 When did your love of Star Wars begin?

It started at the Roxy Cinema in Parramatta, where I saw the premiere of A New Hope in 1977. I went with my whole family - aunties, uncles, cousins - and the three-level cinema was at capacity. There were lines winding up from the bottom all the way to the top.

One of my fondest, most vivid memories is sitting in the old rickety seats and witnessing the opening scene when the Star Destroyer comes in and just feeling the seats rattle and thinking, “Oh wow”. My jaw was dropped the whole way through the movie. I also remember getting up and applauding at the end of the film - it was unreal.

I’d never seen anything like it before and Star Wars just became a part of my life. I started drawing characters and feeling like I just couldn’t wait until the next one. There was collecting of bubblegum cards and comics, and at school we’d have pretend lightsaber fights. 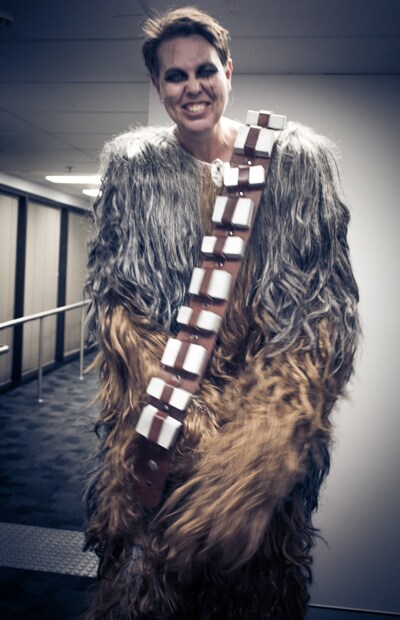 Did you collect the toys?

I didn’t, but my husband did. He has an original Yoda magic 8-ball, so if we need guidance we turn Yoda upside down, and he’ll say, “Try, you must.” [laughs]

At what point did you get involved with the 501st Legion and Rebel Legion?

In 2011 I was in touch with a friend from the States as we shared a love of arcade games. They’d just joined the 501st and said, “You should hook up with these guys in your local area.” I’m into photography too and I was more interested in taking pictures at that stage. As soon as I saw what the 501st were about and their charity work, I wanted in.

Who’s your favourite Star Wars character of all time?

Chewie - it’s gotta be the big fella. He doesn’t say much, but he gets the job done. I’ve always been a big fan of fantastical creatures in things like The Dark Crystal, Labyrinth and The Muppets, so that’s where that love comes from. What was your first costume?

I put my first one together in December 2012, which was Darth Nihlus who was from the Knights of the Old Republic video game. I had no idea how to make it at the time - sewing wasn’t my thing - so I located a gentleman in the US who builds props and he made the whole thing for me within a few weeks. The only thing I needed to source locally were the pants and gloves.

Chewbacca isn’t your only costume, is it?

No, I’ve got a Captain Phasma costume that I just love. A lot of people helped me get that one ready for The Last Jedi premiere, which I’m very grateful for. We welcome the opportunity to be able to show our costumes off! I also have an approved Kylo Ren kit which I really love and it comes with a cool voice modulator. You of course have an incredibly impressive Chewbacca costume…

When it came time, I wanted to do it properly. You can buy kits out there, but I wanted maximum accuracy. My Chewie costume is about 7’6”, and there was a lot of work put into it. So many people helped me - all I basically did was latch hair into a mesh suit which I had made for me, along with the mask and stilts. It took about six months to build it and I kept putting hair into the mesh suit - it was like having a Great Dane constantly sitting in my lap!

People lose their minds when they see him. He’s a fan favourite, for sure. Adults melt and turn into little children. The benefit of being so tall is that I can see across the floor of a convention. I’ll spot a child in the distance and wave to them. They get excited and make a beeline towards me. When they're 12 feet away from me, they stop and quietly freak out at the size of the costume. They look at me and they actually see the real Chewbacca in front of them, it’s really cool.

You also had to learn to walk on stilts to be in the costume?

I did! I’m 5’11’ and the minimum height requirement for an approved Chewbacca outfit is 7-foot, so the stilts were a necessity. Peter Mayhew is 7’5” in the costume and I wanted to at least match him.

I first tried walking on thick, high-density foam that you glue shoes onto. That only added five or six inches, was bulky and hard to walk in. The next version were thin metal stilts with a tiny base, so it was a little unstable and terrifying to get around in. That lasted two weeks until I found stilts that offer more area on the foot to land on, so they’re a lot more secure. It was happy days when I started using those, I’ll tell ya!

I always have a wrangler with me to assist as sometimes you can’t see where you’re going. I’ve had a kid lose himself in my leg hair once! He was so tiny, he got in there and I couldn’t see him! [laughs]

It does get incredibly hot so my record standing in kit is about three-and-a-half hours. I’ll always do at least an hour-and-a-half, but there’s some days I can’t because I can feel my head melting. 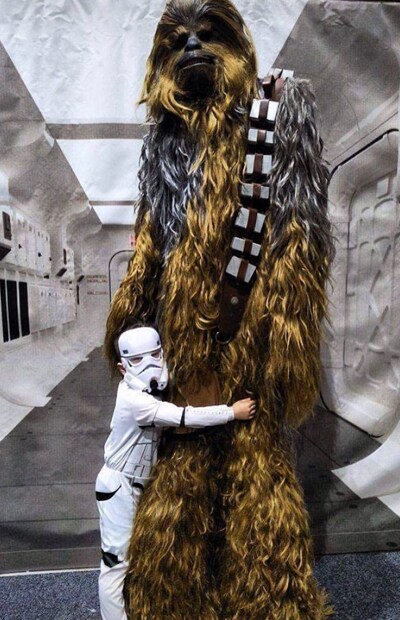 Have you met Peter Mayhew?

I haven’t, but I have a poster that is signed ‘To Sez’, so that’s my pride and joy! I’d love to meet him - I’m going to the next Star Wars Celebration, so hopefully he’ll be there.

Do you have a favourite Chewie moment?

In A New Hope when he’s playing Holochess with the droids and Threepio says, "It’s not wise to upset a Wookiee", and Chewie throws his hands behind his head and sits back with a look that says, “Yep!” The interplay between him and Han is always fantastic too - I absolutely love it. You gotta love Chewie! 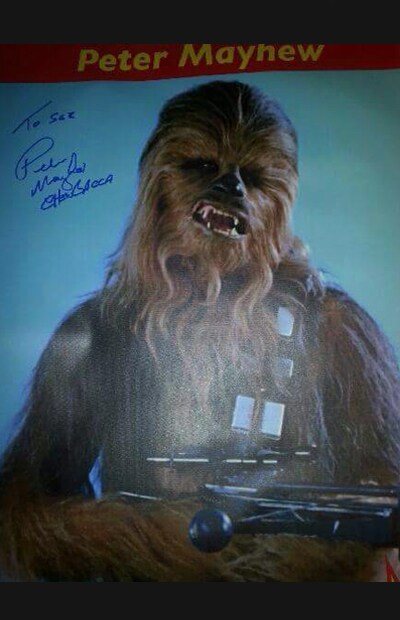 Can you do a Chewie roar?

I can. I used to have a little amplifier that sat in the middle of my chest that would make the noise, but it sounded too tinny. So instead I just honed my voice and learned how to do it. I’m not doing it for you now, if you’re about to ask. [laughs]

Are you excited to see Solo: A Star Wars Story?

I can’t wait for the film! I’m so excited to see that Chewie gets a new bandolier. [laughs] I’m meeting up with a friend in the 501st soon who’s a leather worker, and we’re going to make the new bandolier so I have it for the film's screening. I love the whole story of Han and Chewie. I’d love to see how they come together, I think it’ll be fantastic. Solo: A Star Wars Story is in cinemas from May 24.

Solo: A Star Wars Story is in cinemas from May 24. 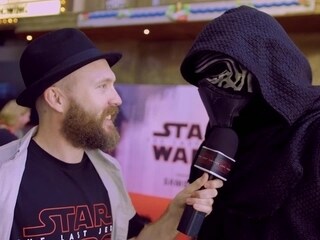 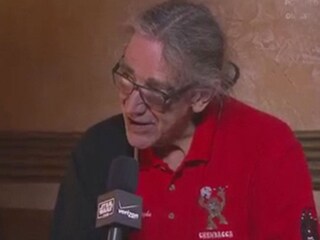